Skip to content
Home
RECIPE
8 Maggi recipes with a twist, for your everyday cravings at the PG

8 Maggi recipes with a twist, for your everyday cravings at the PG:-We can never get tired of eating maggi, can we? The answer is absolutely not! In fact, during the period that it was absent from the market we missed it more than we miss our respective partners. We even tried to cheat on our beloved maggi by trying to get into a relationship with the other noodles available in the market but alas, the affair didn’t last long. But now that ‘Meri maggi’ is back in the market, we are on cloud nine and our love for it has grown all the more strong. After all, maggi is the only good thing that has been constant in our lives since we were born. We have memories of happy times attached with this packet of noodles. Hence, to celebrate our love for maggi today we bring to you 8 maggi recipes with a slight twist. These recipes are bound to satiate your hunger and the everyday cravings that you get at the PG. So take a mental note of your favourite twisted maggi recipe and head to your PG’s kitchen ASAP.

Step 1: Boil the maggi noodles with one teaspoon of oil but without the maggi masala.

Step 2: Take a bowl and mash the potatoes. To it add the finely chopped onion, cabbage and capsicum. Further add chilli flakes, maggi masala and salt to the mixture.

Step 3: Add the boiled maggi noodles to the mixture prepared in step 2 and mix the whole thing gently.

Step 4: Take the mixture in hand and make balls out of it. Keep the balls on your palm and press them to give a flat shape.

Step 5: Take oil in a pan and fry the cutlets till they turn golden brown.

Step 6: Enjoy your crispy cutlets with some tangy tomato sauce.

Step 1: Take the maida, add 1 tablespoon oil, salt to it and with the help of lukewarm water knead it into soft dough. Once done, keep it aside for some time.

Step 2: Take oil in a pan and add finely chopped onions to it. Once the onions turn golden brown, add the other vegetables to the mixture.

Step 3: Add boiled maggi noodles, maggi masala, salt and chillies to the mixture and allow it to cook for some time.

Step 4: Make small balls out of the maida flour and roll it into a thin round shape.

Step 5: Add the prepared mixture to it and roll it over.

Step 6: Take oil in a pan and fry the rolls till they turn golden brown.

Step 7: Cut them into bite size pieces and serve with some green chutney.

Read more: People Can Pray For Love In These 5 Temples In Asia

Step 1: Boil the maggi noodles and add them to besan. Add a little water to this mixture in order to form a thick paste.

Step 3: Heat oil in a shallow pan for deep frying.

Step 4: Make small balls out of the mixture and deep fry them in the oil till they turn a beautiful golden-brown.

Step 1: Boil the maggi noodles without the tastemaker and allow them to cool a little.

Step 2: Break 2 eggs into the noodles, add the chopped onions, tomatoes to it. Further add the chilli, the salt and the maggi masala.

Step 4: Take oil in a pan and spread the mixture in a round shape on it.

Step 5: Cook it till both the sides turn bright golden.

Step 6: Serve it with love.

Step 1: Boil the maggi without the tastemaker and allow it to cool for some time. Add eggs and maggi masala to it and make round patties from it.

Step 2: Keep the patties in the refrigerator for 10-15 minutes so that they can set easily.

Step 3: Take a bowl and add mashed potato to it. Further add finely chopped onion, salt, chilli flakes and coriander to it.

Step 4: Make small tikkis out of the mixture in Step 3 and fry them till they turn golden-brown. Keep them aside.

Step 5: Take the maggi patties and fry them on both the sides till they also turn golden brown.

Step 6: Fix your aloo tikki between two round maggi patties and enjoy your maggi burger.

Step 1: Boil the maggi noodles and strain it through a colander to remove the water.

Step 2: Add 2 table spoons of olive oil to the noodles so that they do not stick together.

Step 3: Take the basil leaves, garlic cloves, walnuts, salt, and maggi masala, and grind them together to make the pesto sauce. Further add ¼ cup of olive oil to this sauce.

Step 4: Toss your noodles in the pesto sauce and enjoy some pasta in Indian style. Step 1: Wash the chicken wings and pat them dry.

Step 2: Take the all-purpose flour in a bowl, add salt and maggi masala to it. Further add water to it to make the mixture thin.

Step 3: Beat two eggs in a separate bowl and add maggi masala to it. And in a third down break down the magic noodles to small pieces.

Step 5: Take your chicken wing and drop it in the all-purpose flour mixture.

Step 6: After this drop the wing in the eggs mixture and coat it evenly.

Step 7: Take the wing and roll in it the bowl with the un-cooked maggi noodle pieces.

Step 8: Carefully drop the maggi-crusted wing into the hot oil.

Step 9: Fry the wing till it turn crispy golden-brown.

Step 1: Heat oil in a pan. Add finely chopped onions along with garlic and ginger paste and cook it till the mixture turns golden brown.

Step 2: Add tomatoes to the mixture. Further add the keema to it and cook till it turns brown.

Step 3: Add salt and maggi masala to this mixture.

Step 4: Boil the maggi noodles without the tastemaker in a separate pan.

Step 5: Add the boiled noodles to the keema and mix evenly.

Step 6: Garnish it with some chopped onions and coriander.

Do you have any other maggi recipe with a twist, in mind? If yes, then do let us know about it in the comments below. Also do not forget to tag your PG mates who share the same love for maggi as you do. 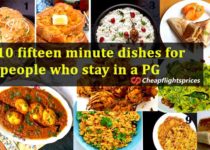 Julia is Editor of ‘Cheapflightsprices.com’. She is the brain behind all the SEO and social media traffic generation on this site.